When you think of buying a budget smartphone, you often tend to pick one that meets all your requirements. Some might want one with a good camera, a decent screen size or one that offers value-for-money performance. Although the needs are pretty basic, most phones in the budget category fail to put up a satisfying show.

With the Moto G22, Motorola aims to change the way we perceive the budget segment. The newly-launched budget smartphone comes with an interesting set of features. It has a 50-megapixel quad-rear camera setup, MediaTek’s Helio G37 SoC, 5000mAh battery, and more.

While the specifications do make the Moto G22 look like a promising device, it is imperative to see whether the smartphone lives up to the hype or not. So, does the Moto G22 cater to the budget user’s requirements? Read the review to find out

The first thing that drew me towards the Moto G22 is its design. Anybody who does not know the price of the Moto G22 would probably think that the device is priced somewhere between Rs 20-25000 rupees. No, I am clearly not heaping meaningless praise on the Moto G22. The plastic unibody design does look posh with a matte finish that has a subtle grey tone to it. I would certainly prefer this over phones that sport awfully-coloured shiny panels or the ones with a dual-tone gradient design. 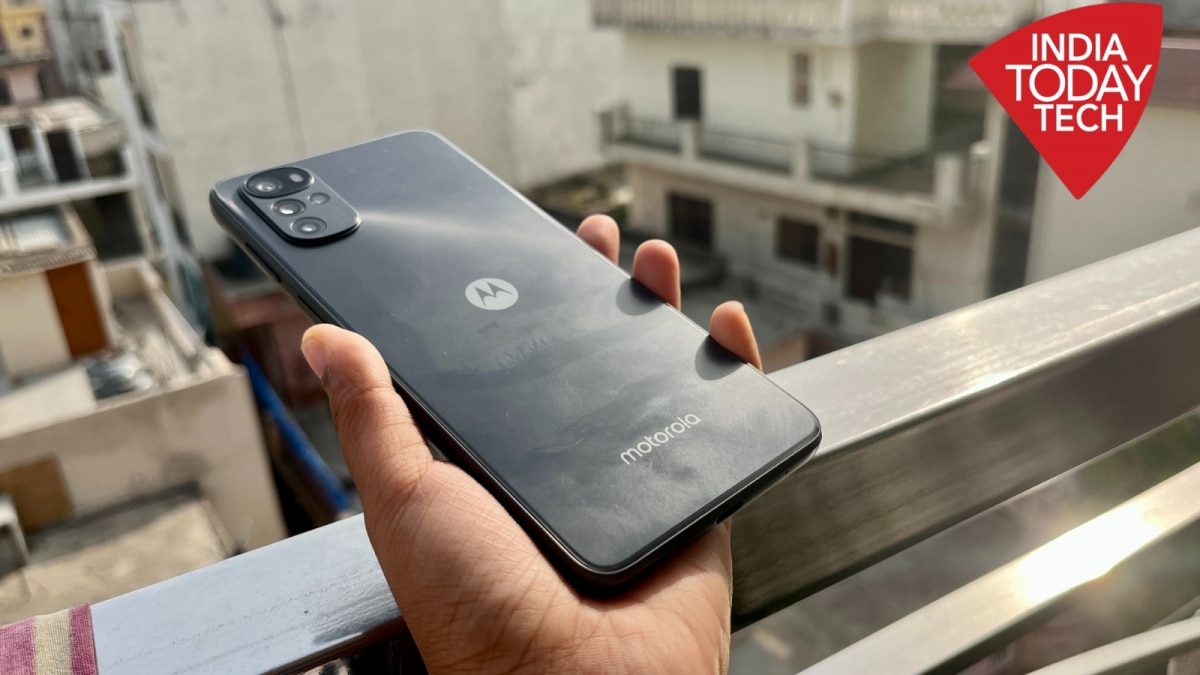 Motorola has ditched its traditional design language that featured curved rear panels and camera sensors lined up horizontally. The Moto G22 features an iPhone 12-like flat-edge design. The edges are slightly rounded and not as sharp as the iPhone 12 and thus offer a nice grip. The oval-shaped camera module is stationed in the rear and includes four vertically-aligned sensors, one of which is adjacent to the depth sensor.

The top compartment is home to the 3.5mm headphone jack, whereas the USB Type-C Port and the mono-speaker grille find space at the bottom edge. On the right edge are the power and volume keys, whereas the SIM tray is on the left. The phone, on the contrary, feels sturdy enough to withstand a couple of falls. Overall, it is a job well done on Motorola’s part to make a budget phone look premium.

Moto G22 brought MediaTek’s Helio G37 SoC to India. It is a fairly average chipset that is best suited for budget phones. When I started using the phone, I found the scrolling and juggling between apps a bit slower than usual. But then I changed the refresh rate to 90Hz, which made things better for me. It, however, did not work as swiftly as a 90Hz display does in other phones. That said, Motorola needs to be credited for including a 90Hz refresh rate display in a budget smartphone.

The display has a 6.5-inch LCD panel but has HD+ resolution. Its colour reproduction is good and can get fairly bright even under direct sunlight. So, even if you have been using an AMOLED display, you would not dislike the LCD panel here. The speakers offer a mediocre output. Do not expect a surround-sound experience on a sub-10,000 phone. That said, the overall viewing experience is satisfying if not the best. The phone is not for gaming. So, it is futile to put the phone through that drill. However, it can handle light games and BGMI can also be played at 30fps settings. The phone got warm after playing BGMI for a good 20 minutes. I also noticed a significant drop in the battery by almost 7-8 per cent.

The Moto G22 offers a near-stock Android experience, which is a delight for anybody who is tired of the pre-loaded bloatware. It only has some of the necessary apps, like Facebook, Gmail and others pre-installed. You also get a lot of customisation options on the Moto G22. The best bit about the phone is that it comes with Android 12 out of the box, which is a rare sight on a budget phone. This means that the phone is also eligible for the next three software updates.

Moving on to the battery, the Moto G22 packs a 5000mAh battery with support for 20W, The phone’s battery lasts more than a day on moderate usage. However, it does take up to 2 hours to refill the battery completely.

The primary sensor managed to capture decent images in daylight. However, in some areas, the images appeared a little washed out. The pictures are sharp and the primary camera manages to capture a good amount of detail. The shutter speed is surprisingly faster for a budget phone. The macro sensor did impress me a lot in daylight. The sensors manage to capture a lot of detail and the colour reproduction is also accurate. For example, in the macro shot of the peach-coloured flower, you can prominently see the water droplets on the flower, its filaments and other parts. For a sub-12,000 phone, the macro sensor did put up a great show. The lowlight camera performance is disappointing. Pictures have a lot of noise and are not well-exposed. The flash does little to make the pictures stand out in low-light conditions. The selfie camera performs well in daylight and in well-lit rooms. It smoothens the picture to an extent, but the quality does not get hampered.

Should you buy it?

For Rs 10,999, Motorola offers a lot of value for money. It has an eye-catching design that looks and feels premium. The phone manages to perform basic tasks effortlessly. Although the LCD panel is decent, the visual experience is strictly average. The Moto G22 comes with interesting camera specs. Its primary camera and the macro sensor perform extremely well in daylight, but the same cannot be said about the phone’s low-light performance. Its battery lasts more than a day on moderate usage, which is not bad at all. Overall, the Moto G22 makes for a great phone in the budget category. There are a lot of positives that can truly overshadow the cons. However, if you want a phone with faster performance and a better camera setup, consider spending a few thousand rupees and getting the Moto G52.

Gaming Monitor Vs. TV: Which Is Best for Your Gaming Setup?