On 2 December 1906, the world’s first all-big-gun battleship, HMS Dreadnought, was commissioned into the Royal Navy. Instantly every other battleship was rendered obsolete. The new Strix Scar 17 from Asus’ Republic of Gamers arm has done something very similar to every other laptop.

Combining Intel’s latest 12th generation Alder Lake processor and Nvidia’s souped-up GeForce RTX 3070 Ti, the new Strix Scar 17 is not only state of the art but redefines what that art is. Other 12th gen Intel-based gaming machines will arrive, and soon, but for the moment, the ROG Scar Strix 17 rules the waves.

If you plan to spend some serious money on a gaming laptop you’re probably going to want something cutting edge.

Right now, that means a shiny new Intel 12th gen processor – preferably the top-of-the-tree Core i9 model – a high-end Nvidia GPU such as the new GeForce RTX 3070 Ti or 3080 Ti, plenty of fast DDR5 RAM, lots of storage and a large high-refresh display.

I have trouble convincing myself that the extra performance you’ll get from the 3080 Ti is worth an extra £800, so I’d recommend the cheaper model. Coincidentally, this is also the model Asus has sent me to review.

If you want all the gaming hardware inside a smaller package that looks a little more business-like, then Asus’ ROG Zephyrus M16 is a good choice. For a similar price, you get the same CPU and GPU but combined with a cracking 16.1in, 16:10 aspect ratio 165Hz display. As an all-rounder and with an asking price of £2,570 the M16 really does take some beating.

The previous king of the gaming hill, Acer’s storming Predator Helios 500, is still worth considering not least because of its potential for overclocking, which is the main reason it comes with twin power supplies. A monster of a laptop, the Helios 500’s 4K mini LED display is a wonder to behold. Oddly the Helios is already getting rather hard to find,

If you can still find them sloshing around retail channels, the 2021 17.3in versions of the Alienware x15 R1 and Lenovo Legion 7 are both well worth seeking out, even though they’re built around older silicon.

Physically, the 2022 Strix Scar 17 is the same as the 2021 model, so it still weighs 2.9kg and measures 395 x 282 x 28.3mm, which isn’t at all bad for a 17.3in gaming laptop. It’s an entirely black affair made from a combination of aluminium and plastic that feels reassuringly solid. The overall aesthetics benefit from the screen bezel being only 8mm wide at the top and sides.

As you’d expect from a hardcore gaming laptop the light show is a full-on acid trip, with RGB LEDs beaming out of the back and the bottom of the lid and from the front and sides of the chassis. Combine that with per-key keyboard lighting and Asus’ Aura Sync software and you can create some impressive lighting effects.

Other gamer-centric touches include a keyboard deck that’s partially translucent and a replaceable left-hand hinge cover so you can personalise the look of the laptops (three are supplied in the box, and you even can 3D-print your own).

Asus’ KeyStone tech is also supported. This a small magnetic dongle that slots into a space to the right of the keyboard deck and can be set to activate various features such as revealing an encrypted space on the SSD or putting the laptop into Turbo mode. Is any of this stuff truly necessary? Of course not. Is it nice to have? Obviously.

Removing the bottom panel is easy enough, but you do need to remove a couple of long ribbon cables first. Once that’s done you’ll have easy access to the two SODIMM memory slots so you can swap out the two 16GB modules for a brace of 32GB modules. There’s also an empty 2280 SSD bay so you can add more storage alongside the existing 2TB Samsung PCI-E Gen4 x4 card.

The chiclet-style optical-mechanical keyboard has a healthy 2mm of travel and a trigger time of 0.2ms which combine for a pretty satisfying gaming – or typing – experience. The keyboard should last the distance, too, with each key good for 20 million presses.

To aid quick access, the function keys are separated into three distinct blocks (four, if you include the lonely Escape key on the far left), while the large cursor keys are well spaced and separate from the rest of the keyboard. Five dedicated gaming hotkeys give quick access to features such as the volume, fan speed and the Armoury Crate application. The trackpad, meanwhile, measures 130 x 77mm, is perfectly responsive and has a very crisp click-action.

As is usual with updated gaming laptops, the cooling system is hyped as more effective than the previous model but, despite the upgraded “Arc Flow” fans and “liquid metal” cooling, the heat generated by the powerful internal components still has to go somewhere.

Mostly it seems to exit out of the left-hand side vent because the surface above it – around the Escape and Tab keys – got uncomfortably hot after an hour’s hard gaming. It’s a little strange that the deck gets hotter on the left, where you rest your hand, than on the right, where you don’t. At least the fans are pretty quiet, even when running at full speed.

As for the webcam, there isn’t one, and there are no biometric login options either, which is a little tight-fisted of Asus on a laptop with an asking price of over £2,500.

Like the M16’s display, the Strix 17’s screen is capable of reproducing 140% of the sRGB and 99.4% of the DCI-P3 colour spaces, which makes everything look naturally colourful and well saturated.

The Delta E colour accuracy was a little adrift using the default Asus colour profile at 2.54 versus sRGB and 3.31 versus DCI-P3 but again, for a dedicated gaming machine that’s acceptable, and the gamut coverage is wide enough to make recalibration worthwhile if you want to get those Delta E numbers down.

Open up the Armoury Crate app and you can pick any one of eight display profiles with names such as Racing, Scenery, FPS and Cinema, which alter the contrast, gamma value and brightness and so forth from the default setting that I used for my measurements.

Asus has chosen to fit the Strix 17 with a multiplexer or MUX switch, which takes the integrated graphics processor out of the equation and connects the Nvidia GPU directly to the monitor. This hurts battery life, but if you’re gaming hard you’ll probably be plugged in, so who cares? The benefits are increased frame rates and improved video quality with G-Sync adaptive synchronisation. However, switching the MUX on and off does involve a restart.

The Dolby Atmos quad-speaker system delivers a tight and punchy sound with solid bass and decent high-end definition. It’s not the most musical of speaker systems as it’s clearly been optimised to create a visceral and tightly focused sound stage. Indeed, there’s a general lack of space and openness that the various Dolby settings do little to alleviate. There’s volume aplenty, however, with an average output of 75dB and peaks of 84dB (measured at a distance of 1m from the laptop), which makes for a louder system than Acer’s Helios 500.

The big story here is Intel’s new 12th generation processors which, in Core i9-12900H form, pack 14 cores – eight Efficiency and six Performance – the latter capable of a Turbo boost speed of 5GHz. Combine that with 32GB of dual-channel DDR5 RAM and a PCI-E 4 mainboard and you’re really cooking with gas. 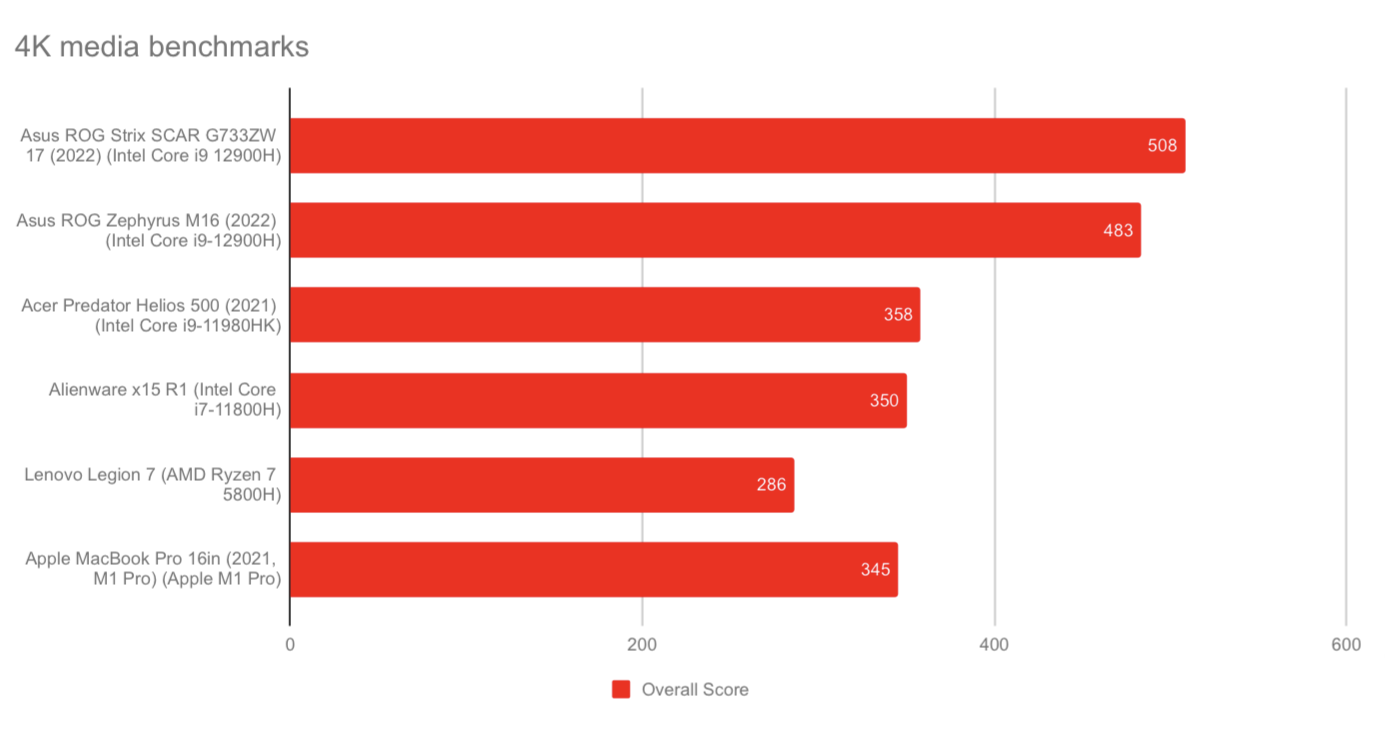 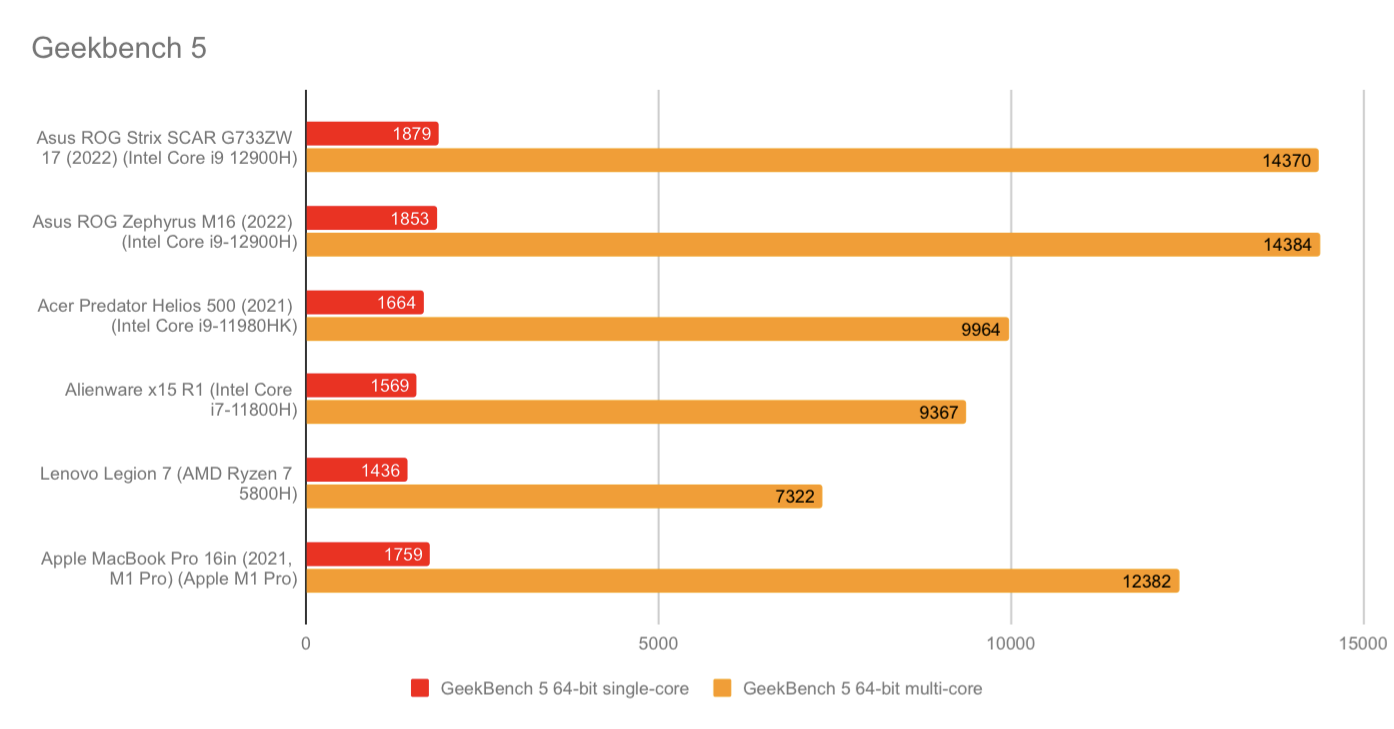 Intel promised a big leap forward in performance with its new Alder Lake chips, and it hasn’t disappointed. The Strix 17 scored 508 points in the Expert Reviews media benchmarks. Not only is it the first laptop to cross the 500-point barrier but it’s a massive 150 points ahead of the Acer Helios 500, a state-of-the-art 11th gen gaming laptop with an RTX 3080 GPU. The Geekbench 5 multicore score of 14,370 is similarly impressive and has doubtless given the engineers at AMD something to think about.

Translating that into gaming terms, I started by running the Metro Exodus benchmark at 1440p on the highest, and very demanding, Extreme preset without DLSS and got 35.8fps. Knock the resolution back to 1080p and set DLSS to Balanced and that number jumps to 65.6fps with no visible change in video quality. With the settings knocked down a notch further to Ultra, it scored 90.3fps, while on High it hit 110.2fps. 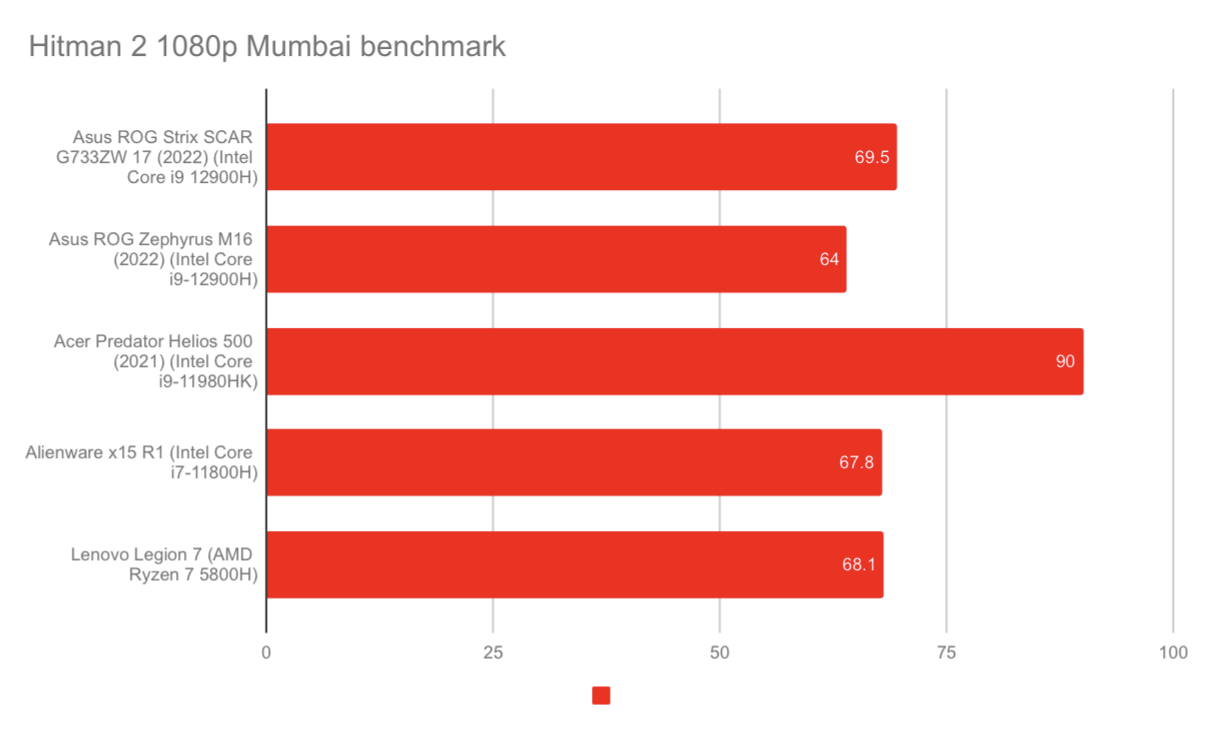 Turning to Wolfenstein: Youngblood at the toughest possible benchmark settings (“Mein Leben!” video quality, 1440p resolution, ray tracing but no DLSS) the Strix 17 managed 98fps. At 1080p that jumped to 150fps. The demanding Hitman 2 test scored 69.5fps at 1080p and 44.5fps at 1440p. Lastly, Shadow of the Tomb Raider ran at 68fps at 1440p without DLSS and ray tracing set to Ultra. Knocking the resolution back to 1080p and engaging DLSS pushed the frame rate up to 98fps.

Now, granted the Helios 500 can match or better those gaming scores, but remember it’s running an RTX 3080 GPU, not a warmed-over RTX 3070, costs much more and is really a desktop squeezed into a laptop case that requires two huge power bricks to run flat out.

I’ve no complaints about the performance of the 2TB Samsung SSD, which achieved impressive sequential read and write speeds of 5,344MB/sec and 2,643MB/sec, although it’s worth mentioning that the new ROG Zephyrus M16 does better when it comes to write speeds. Both Asus machines boast similar 4k read and write speeds, with the Strix Scar 17 achieving 74.5MB/sec and 228.4MB/sec respectively. 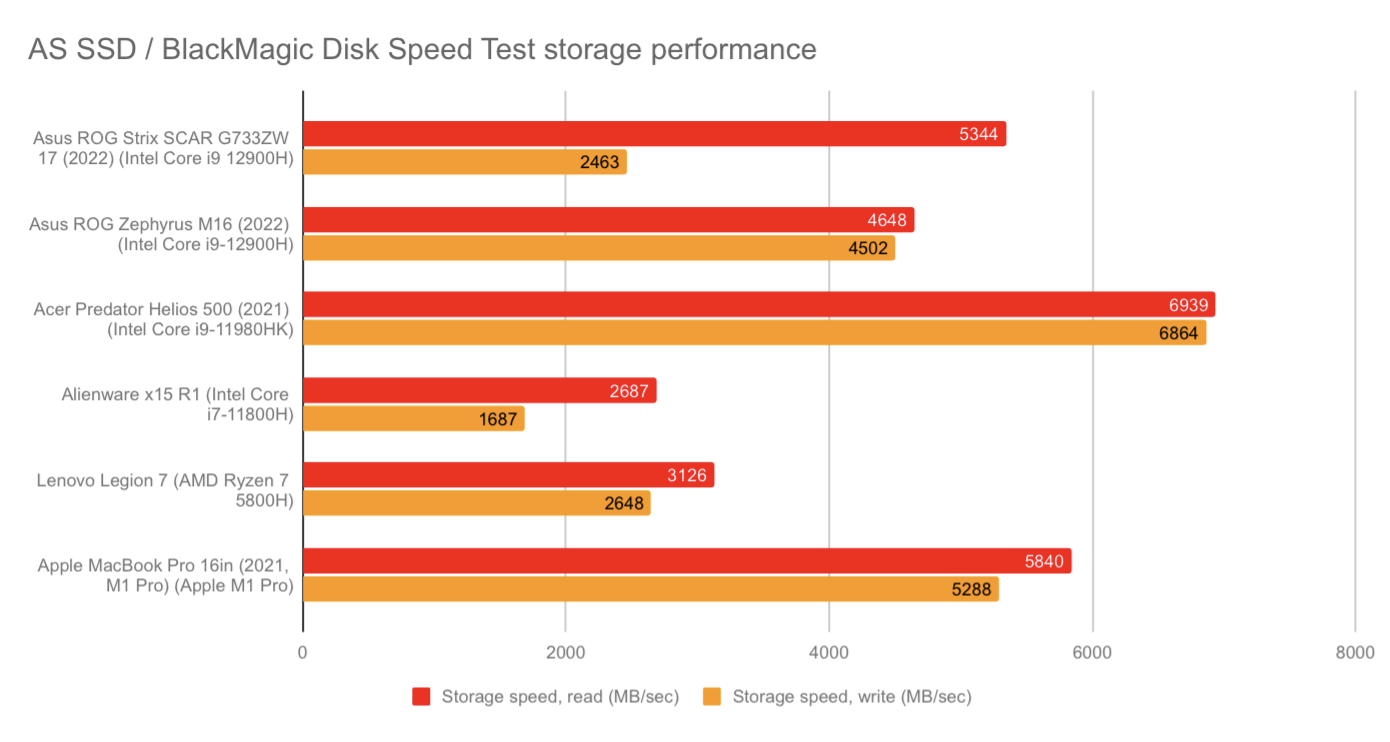 The 90Wh battery lasted 7hrs 15mins in our video rundown test, which is quite a bit shy of Asus’ claimed 10hrs 30mins, but then the precise settings used in battery tests can generate hugely variable results. I don’t think 7hrs 15mins is actually all that bad for a machine like this with a 240Hz 1440p display. The rather large 280W power adapter can recharge the Strix 17 from flat to 50% in just 30 minutes, while USB Type-C charging up to 100W is supported for added flexibility. 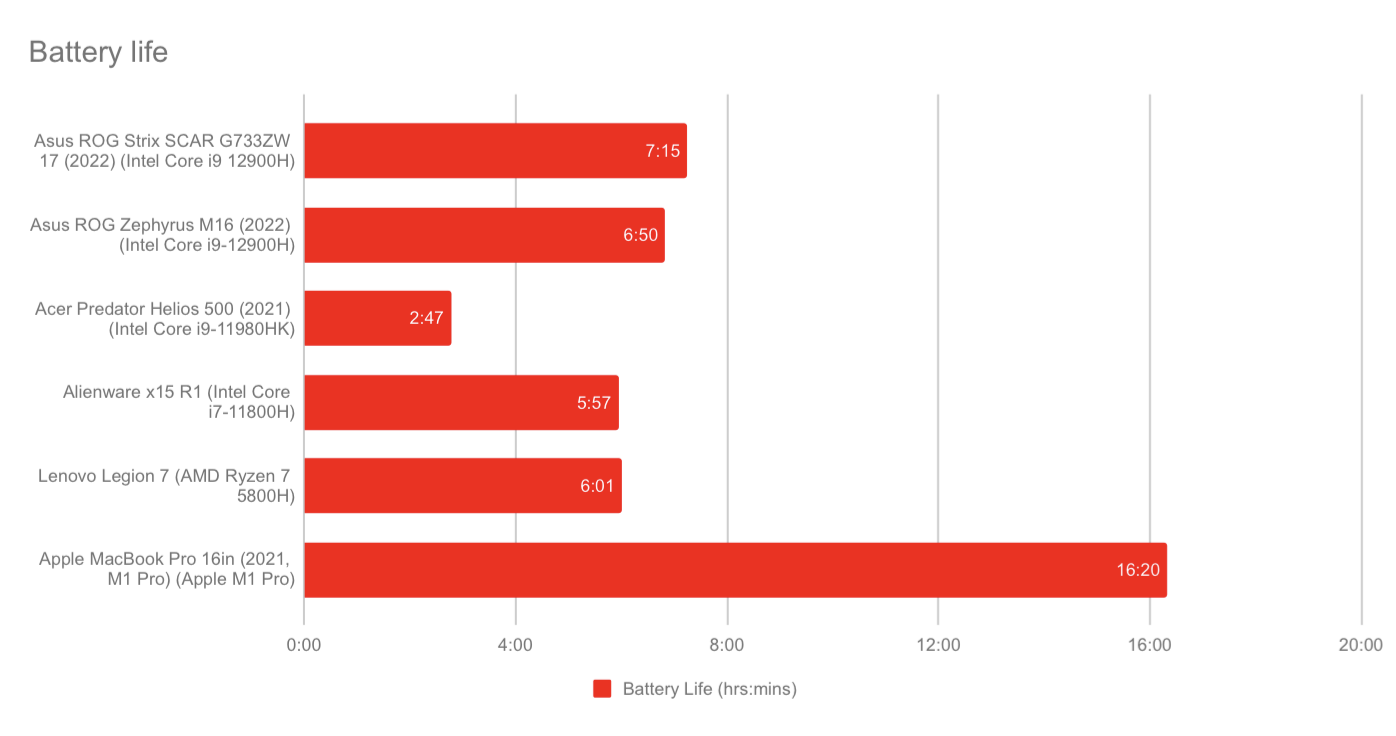 The release of the new Strix 17 has fired the starting pistol on the race to get gaming laptops to market with Intel’s latest and, it must be said, hugely impressive processors.

Until we get our hands on 12th generation machines from Alienware, Acer, Lenovo and Razer, however, the Asus ROG Scar Strix is going to be as good as it gets.

It’s supremely powerful, has a decent screen and sound system and is replete with all the subtle – and not so subtle – features that discerning gamers look for.

The BTS-Approved Bose Noise Canceling Headphones 700 Are on Sale Just in Time for...